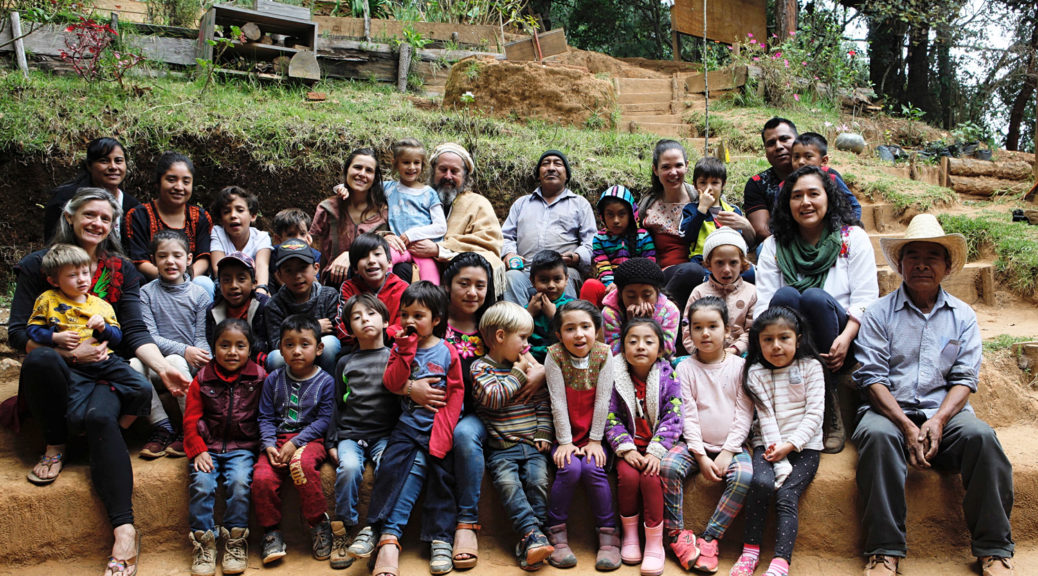 In a fairly remote part of the Sierra Sur mountains in the Mexican state of Oaxaca, amidst high altitude cloud forests of oak and pine, you’d be lucky to find a little-known village, simultaneously magical and completely ordinary, where the local population with indigenous roots have harmoniously co-existed with a diverse range of alternatively minded outsiders and foreigners for a decade. While culture shocks from both sides of this divide are certainly not unheard of, profound truths of human interconnectedness and community bridge the gap like a rainbow.

It seems clear to me that within the current context of the global political, social, economic and especially ecological reality, our world is facing great upheavals for which we are completely unprepared. The planet is pleading for a profound human cultural change and from that awareness arises the need to raise and educate our children differently. Our Oaxacan mountain appears to attract families that wish to challenge the all too common factory model of mainstream education. As the square boxes we have to fit into in order to function well in society become increasingly claustrophobic, one remedy is to allow children’s natural roundness to flourish.

Our kids shouldn’t have to become square. The world needs to remember its roundness. 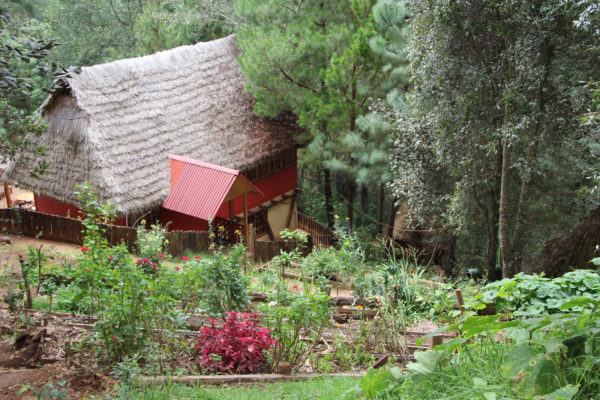 Launched in 2014, Ananda Learning Center is the love-child of the tireless dedication of a few inspired individuals and the support of the community of parents. Loosely based on Maria Montessori’s renowned model, Ananda seems to me to aim to celebrate a child as a limitless, autonomous being with unique interests, talents, needs and challenges. A child learning on their own terms, but with guidance, will not only flourish in freedom and creativity but also find their own natural path towards responsibility, focus and sociability.

At least this is my hope and, so far, my experience as I witness the development of my nearly five-year-old son after three joyful years attending Ananda. For me, the immense value of the school is best summed up in Sylvan’s eagerness to go to school every morning and the struggle to get him to leave every afternoon… 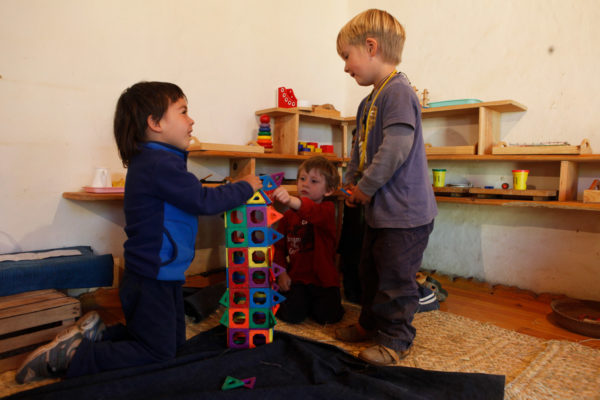 At Ananda the kids grow up seeing diversity as normal, which is a much-needed lesson for a world of increasing racism and segregation. A little more than half the preschool and primary children are of local origin and the rest from around the world. From this unusual mix of the traditional and modern, the deeply rooted and the worldly, the grounded and the spiritual, emerges a new culture of open-mindedness, acceptance and of unity across borders. 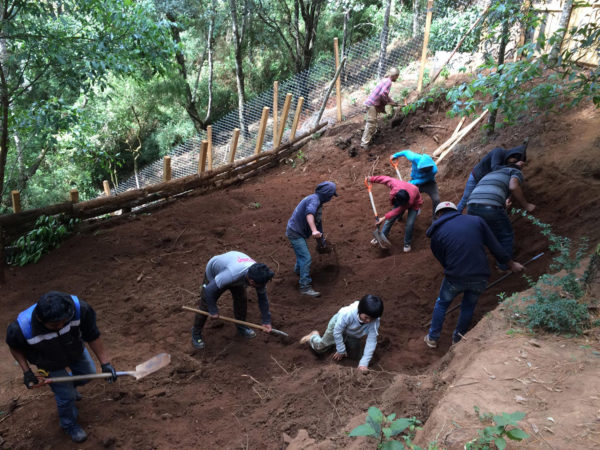 Simultaneously, Ananda creates unity amongst an equally diverse group of parents. When working shoulder to shoulder on one of the many tequios (communal workdays) – be it to create teaching materials or building a new school structure – I feel a strong sense of community. 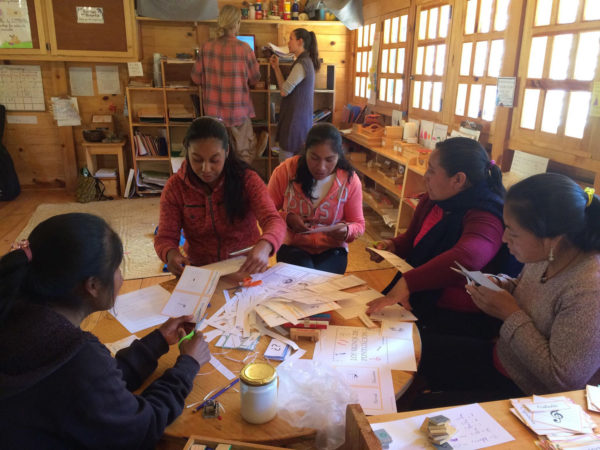 And as it should be, this diversity also extends to the teachers who form their own little multicultural community. Local teachers seem to me to offer stability, continuity, care and roots while their international counterparts might bring new ideas, skills and excitement to the mix. They are equally indispensable. 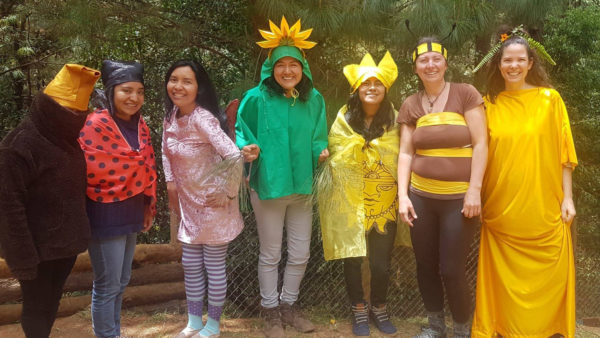 And that’s how it was with Joan, Daya and their kids who rocked up from the US in 2017 with their smiles, songs and solid teaching experience. Daya and his guitar took on music duties and suddenly the familiar sound of the wind in the pine needles on my way to school was augmented by children’s joyful singing voices bursting through Ananda’s straw roof on their way to the heavens.

Time passed, the children’s repertoire of songs grew bigger every day, Daya became a real friend of mine… and all too soon it was time for them to leave! With no record of the kids’ musical progress? No way. It wasn’t until Daya’s very last day at school that we managed to get our act together and organize a rushed recording session. As I already run my own studio, Sylvan Sound Temple, the school asked to make use of my recording skills – which within a participatory school system is as natural as bread and butter. 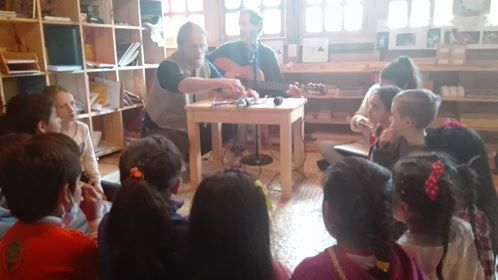 So right there, in the natural ambiance of the primary school classroom, with kids and teachers leaving and entering as they pleased and the preschoolers playing loudly outside, we circled around my portable recorder and a few microphones – Daya and Joan on one side, the primary school children in a semi-circle in front of them and with the teachers behind the kids. It was more like an ordinary day at school than a slick and serious recording session. As such, these recordings not only capture the songs but also some of the free-flowing essence of Ananda, the flowery expressiveness of excitable children at free play. (Indeed, I decided to leave many songs with unedited breaks in between them that naturally flow into each other, so the listening experience will be best if you use a music player that doesn’t add gaps in between tracks.)

Colores del Corazón (Colors of the Heart) gives you songs of light and love from many cultures in English and Spanish, and sometimes both. But for a couple of exceptions it is not an album of “children’s songs” – after a voice warm-up song, you will be taken on a musical journey through Mexican traditionals, songs of thanks and appreciation of the earth, spiritual hymns, rainbow family songs, indigenous chants, words of wisdom and teachings for children and adults alike, and even an original song by Daya and Eustaquio. Three duets between Daya and Joan intersperse the songs sung by everyone. 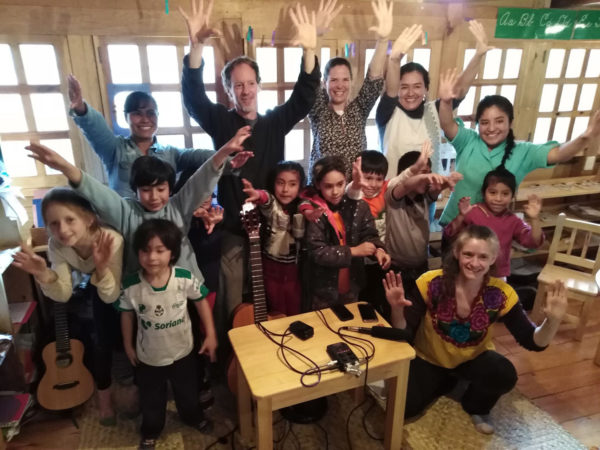 In this story I saved perhaps what I like best about Ananda Learning Center for last, something that makes this project truly unique. In order to bridge cultural and economic realities in a place where a normal daily wage is around USD10, to fight elitism and keep the school open for all types of children with all kinds of parents, there is really only one congruent way to run the school financially – by donation! This helps to create a community of parents with shared responsibilities. We all donate financially and energetically within our capacities, which means participating in tequios and meetings, giving money and tortillas, participating in events, teaching workshops and maintaining computers. Oh, and recording albums!

This idealistic and ethically sound choice fosters community and belonging but also makes the challenge of financial sustainability even greater, especially as we receive zero government support.

Through Sylvan Sound – my tiny, niche record label focused on music linked to ecosocial projects – we offer you the chance to support a story of light at the darkest of times, a little glimpse of hope for the world at the other end of the tunnel. We offer not just a beautiful album of music to enjoy within a context you can believe in, but also a teaching tool with lyrics and chords for similarly minded education centers and home-schoolers.

We guarantee that every cent raised through the sale of this album, after bank charges, will go directly towards the running costs of Ananda Learning Center.

I would like to thank all the children, parents, teachers, administrators… and Daya & Joan, we miss you! And most of all, thank YOU for your support. We hope you enjoy the album.

Listen to the free single and get the album here!